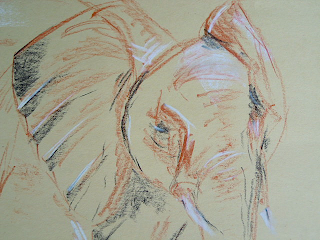 I was reminded of Conté crayons a few months back when my artist friend Peter dropped off a Conté drawing he'd made that day (it's still on my fridge, Peter!). It's been years since I've done anything with Conté crayons, so it seemed like a good idea for today's elephant.

Conté crayons—also called Conté sticks, or simply Conté—were invented in 1795 by Nicolas-Jacques Conté. The original combination of graphite and clay was created in response to a shortage of graphite caused by the Napoleonic Wars.

In addition to its use as a drawing and painting material, graphite was used to line the moulds for cannonballs. This allowed the production of smoother, rounder cannonballs, which fired farther, particularly from ships. This technological advance is said to have contributed to British naval superiority.

Not only had France depleted its graphite stocks for cannonball production, but it was also suffering from a British naval blockade. This prevented France from importing British graphite, the best source at the time. To this day, England contains the world's only known deposit of Borrowdale graphite, which is extremely pure, soft and easily broken into sticks.

Although Conté crayons were originally invented as a means of stretching available supplies of graphite, it was soon discovered that the composition of Conté sticks was easy to manipulate. This meant that a range of blacks and greys could be produced, as well as different grades of hardness.

Today, Conté crayons are made of kaolin clay, with cellulose ether as a binder. The traditional range of blacks, whites and iron reds are made with natural pigments. These three basics were likely created to accommodate a drawing style known as "trois crayons" (three crayons), although the palette has since expanded considerably to include a wide array of colours. Conté material is also available in pencil form.

In the years since Conté's invention, many well-known artists—including Henri de Toulouse-Lautrec, Pablo Picasso, Gustav Klimt and Willem de Kooning—have worked with the medium. And, if you've ever taken a drawing class, chances are that you've had a Conté stick in your hand at some point.

In the past, I've never really liked Conté sticks. I think it's partly that I don't really like working in chalk or hard pastels. I also don't like the feel of chalky fingers. It's probably why I've had this great set of Conté crayons for years, which I've hardly ever used. 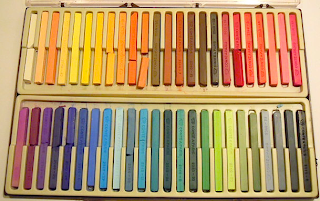 I wasn't sure what paper to use for today's elephant. Conté crayons require paper with a bit of a "tooth", or roughness, but not so much tooth that it interferes with the design. This means that cheap paper is actually good for Conté crayon—although not so good for archival preservation—while expensive paper such as watercolour paper is not necessarily as good. This depends, of course, on the effect you want to achieve.

For today's elephant, I chose an inexpensive paper in a greyish-ochre colour. I chose it mostly because it had the kind of tooth I wanted, and also because it was the biggest pad of paper I had, and I felt like working big today.

Although I had 48 colours from which to choose, I decided to try the traditional trois crayons technique for today's elephant. Although I'd used the red-brown "sanguine" once in a life-drawing class, and I'd used black and white before, I'd never combined all three. 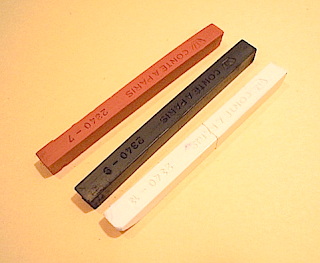 I liked the idea of drawing something fairly realistic with this technique, so I drew from a photograph today. 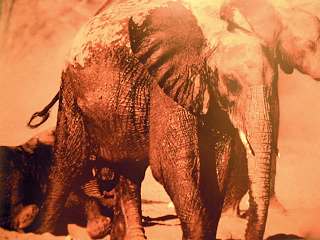 I started by lightly sketching the general outline of the elephant in sanguine. I wasn't sure if there was a rule about which of the three colours to use first, but the muddy little elephant in the photograph was mostly brown, so I went with sanguine. 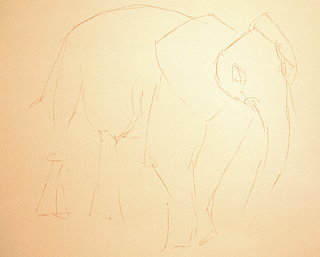 I then laid in a dusting of black to roughly indicate shadows, and white to more or less locate highlights. 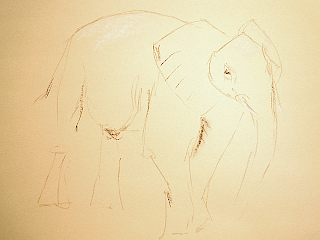 After that, it was mostly a matter of adding colour to fill in the drawing. I didn't find that smudging worked very well for me. To be fair, however, I didn't really lay down enough pigment to smudge. I also wasn't terribly successful in using the side of a full stick of Conté. 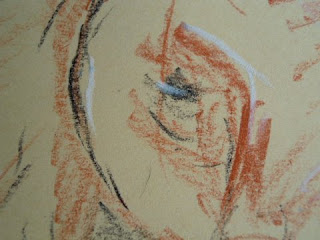 Conté allows for both sharp lines and soft shading, which is its great strength as a medium. Since sharp lines advance and soft lines recede, you can get some nice dimensionality, just by playing with the weight of the line. I also liked how black areas popped if I laid white right next to them. 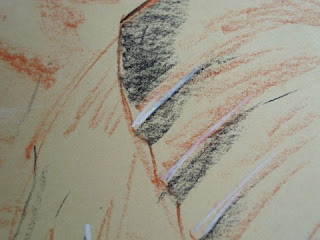 When you're finished, if you like what you've done, make sure to spray it with some sort of fixative. The design will never rub off completely, but your pigments will definitely smudge and migrate if not fixed.

I'm a bit surprised at how well this turned out. It took me about an hour, and it was an easy technique to pick up. I doubt, however, that I'd ever use this shade of paper again for trois crayons, as it was a complete pain to photograph. And next time, the whole box of colours gets to come out and play. 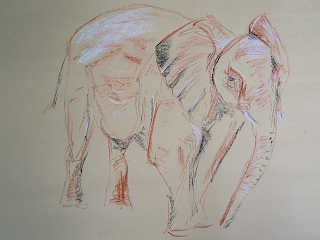 Elephant Lore of the Day
During the Napoleonic Wars (1799–1815), France experienced tremendous military success. In 1810, to commemorate his conquests while also proclaiming a new era in France, Napoleon Bonaparte commissioned The Elephant of Revolutionary Oblivion (also known as l'Éléphant de la Bastille).

The massive structure was to be built on the former site of the Bastille, which had been pulled down during the French Revolution. Napoleon envisaged an elephant cast in bronze, with a staircase inside, allowing visitors to climb up to the elephant's back.


Unfortunately, when it came time to erect the elephant in 1813, France was involved in a disastrous military campaign in Spain. To save money, the elephant was cast in plaster instead of bronze.

Two years later, Napoleon's empire collapsed, and The Elephant of Revolutionary Oblivion was left to its own sad oblivion. The monument slowly rotted, becoming a weedy home for rats. Although local residents petitioned for its removal, the elephant remained where it was—even after the July Column was erected in the centre of the Place de la Bastille in 1830. It wasn't until 1846 that the remains of Napoleon's bizarre monument were finally hauled away.

For more elephants, including elephants made by others, see my new blog, Elephant a Day 2.0 here.

Sheila Singhal
Sheila Singhal has been making things pretty much since the day she could walk, often to the dismay of parents, siblings, pets, and husband. Her day job involves running her own company, which provides writing, editing and translation services on four continents for clients in the cultural industries. She has also worked as a modern dance teacher, theatrical costume designer, photographer and illustrator, while making short films on the side.