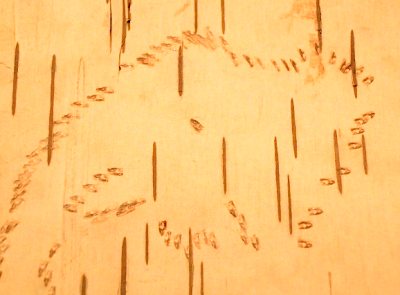 I've been meaning to try this for awhile, but I've always found it a bit intimidating. However, spring is the traditional time to harvest bark for this First Peoples activity, so I figured I'd give it a try.

Several years ago, a close friend showed me a birchbark biting she had purchased in the early 1980s. At the time, the elderly woman who had made the biting was one of the last practitioners of what was then a dying art. Happily, interest in birchbark biting has revived considerably in recent years, with several people now producing elaborate bitings using traditional methods.

Birchbark biting involves, as the name suggests, perforating sheets of paper-thin bark with your teeth. The bark is first peeled in thin layers, then folded in various ways, before being bitten with the incisors. Originally practised among the Ojibwa, Cree and other Algonquian groups who used birchbark for everything from canoes and containers to shelters and scrolls, birchbark biting began as an informal design process: a way of experimenting with designs that might later be turned into quillwork or beadwork on clothing and containers. Women engaged in birchbark biting as a recreational activity, and as a form of friendly competition.


For a traditional birchbark bitings, the bark is often folded in four or more wedges of equal size. The most common designs were floral and geometric patterns, often with symbolic and religious significance, and often specific to the artist.


Today, work by virtuoso birchbark artists like Angelique Merasty and Pat Bruderer has enlarged the repertoire considerably, to include representational figures such as animals, humans and insects. The technique has also changed slightly. Whereas bitings were originally more or less design sketches for other decorative work, today the bark is sometimes bitten all the way through to produce a sort of lace, or simply thinned enough to allow light to shine through. To see the process in action, click here.


I actually had some birchbark on hand, given to my by my mother from her birch trees a few years ago. The trees are sadly gone now, but they were much loved and cared for in their time.

These were the pieces of raw birchbark I had. The first thing I needed to do was peel the bark to a thickness that one source says should be "thinner than paper". Okey dokey, then. 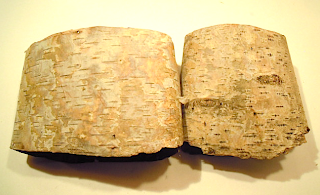 Peeling the birchbark was quite difficult. It may have been because the pieces I had were a bit dry, although I seem to remember that it wasn't all that easy to peel a uniform sheet of birchbark when I was a kid, either.

I started by scoring one of the raw pieces, and peeled away a couple of largish pieces. 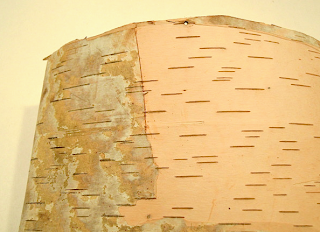 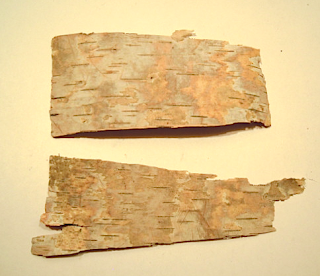 After this, it becomes a matter of meticulously peeling away the layers—rather like peeling the layers of an onion—until you have a single layer to work with. It should have a velvety feel, somewhat like chamois, and should be slightly thinner than bond paper, but thicker than tracing paper. One side will be darker than the other and, according to one older expert I saw online, you want to use the lighter side to bite. 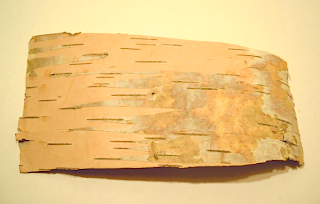 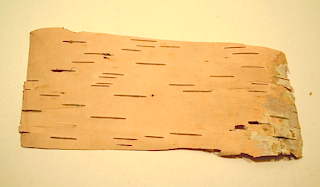 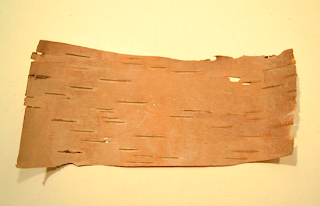 I attempted biting a piece of paper last night before tucking into actual birchbark, just to be sure it wasn't an activity that was completely beyond me. To be honest, even on paper it's very difficult to make a design you can't see. You're essentially drawing a pointillist design with your eye teeth, working from sense memory alone.

To start, I folded the piece of bark in half. Most traditional bark biting involves at least four folds, but I figured two was about all I could handle. 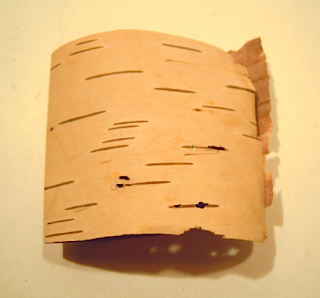 Here are my first little bites. The bites lock the two layers together, which I found interesting—and helpful, because it keeps the bark from sliding around. 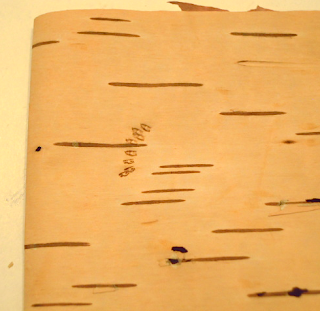 Taking my teeth away from the bark to see what I was doing was a big mistake at this stage. It's incredibly difficult to find your place again and to make a contiguous line. The two photographs below show what the final version of my first attempt looked like, both front and back. 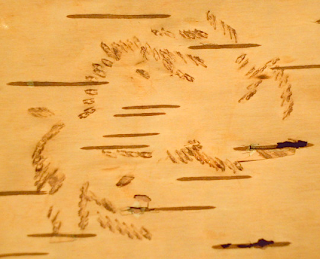 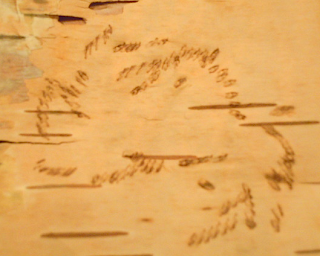 For the next elephant, I decided I would hardly take my teeth off at all. This has its own challenges, because it's very difficult to go all the way around an elephant shape in one go. The birchbark also gets stuck on the corners of your mouth along the way. I see now why it's a good idea to have many folds.

This time, I tried a new trick for joining my lines. Holding my thumbnail at the precise point at which I wanted to restart biting, I tried to place my eye teeth over that exact spot. I discovered that this doesn't work, either.

The photograph below shows my second attempt. The radiating lines in the background are because I tried to draw an extra top line for the ear, and ended up floating a line directly above the centre of the elephant's head, using my clever thumbnail technique. I decided it looked stupid, so I made it look more stupid by adding more lines. 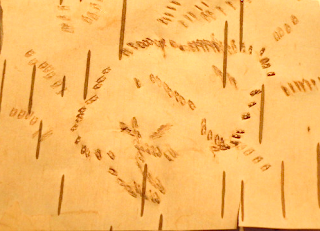 By elephant number 3, I was not really getting any better, but I had already peeled a couple of sheets of birchbark, so I tried another one, this time not folding it. Looks like he's either blowing bubbles or smoking a pipe. 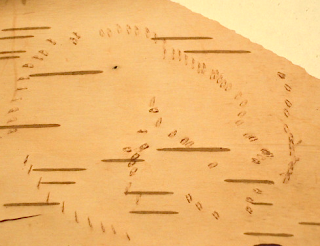 I decided to try one more, then give up for the day. By this point, I had discovered that the thumbnail technique does work, but you have to place your teeth farther away from the thumb than you think. This seems to work a lot better, as you can see below, where most of the lines at least join up. More or less.

I didn't hate this activity by any means, but I would need a lot more practice to be any good at it. It's an art passed down through families for a reason. I did rediscover the beauty of birchbark—which I think we tend to take for granted around here—and I liked the thin layers. I will definitely try birchbark biting again sometime, but maybe next time I'll stick to little geometric designs, and leave pictorial work to the real virtuosi. 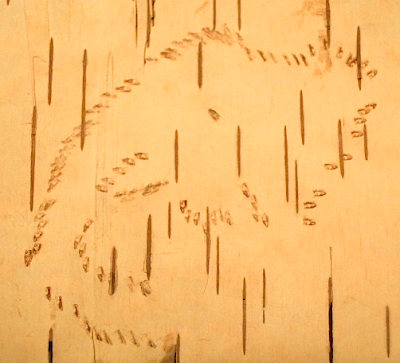 Elephant Lore of the Day
Elephants dislike biting flies as much as we do. They also use fly swatters.

Although elephants use their trunks and tails to swish at pesky insects, researchers have discovered that elephants also make their own fly swatters. In July 1993, a paper presented by Benjamin and Lynette Hart at an Animal Behaviour Society conference reported on the clever toolmaking capabilities of elephants.

Studying a herd of 15 captive Asian elephants in Nepal, the Harts discovered that the elephants fashioned fly swatters out of anything they could grab with their trunks. Their materials included burlap, banana stalks and leafy branches. Not only did the elephants wield what they plucked; they also shortened the branches and trimmed off side stems to customize their tools.

Charles Darwin had observed elephants using makeshift fly swatters as early as 1871, as had others in isolated sightings over the years. The Harts' study, however, was the first to systematically document their use by elephants.

For more elephants, including elephants made by others, see my new blog, Elephant a Day 2.0 here.

Sheila Singhal
Sheila Singhal has been making things pretty much since the day she could walk, often to the dismay of parents, siblings, pets, and husband. Her day job involves running her own company, which provides writing, editing and translation services on four continents for clients in the cultural industries. She has also worked as a modern dance teacher, theatrical costume designer, photographer and illustrator, while making short films on the side.